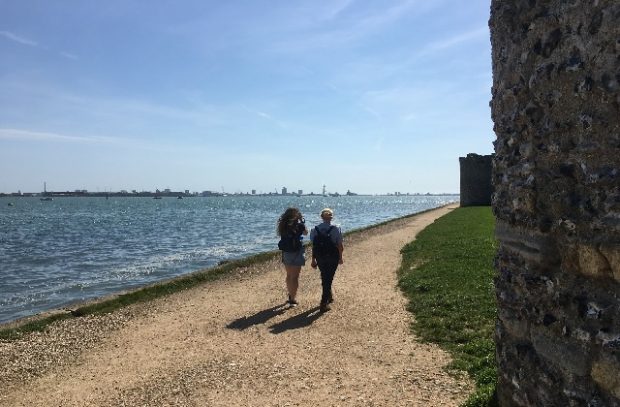 Today (Thursday 20 June), plans to open three sections of the England Coast Path across the South Coast have been published by Natural England. There has been regional print and broadcast coverage including in Cornwall Live and on BBC Radio Cornwall.

If approved, the Gosport to Portsmouth proposals will link up existing sections of the England Coast Path, to create a continuous signposted walking route around Portsmouth Harbour for the first time.

The Newquay to Penzance stretch passes through the popular tourist destinations of Newquay, Hayle and St Ives, also taking in Land’s End and the iconic mining coast of West Penwith.

There is now a period of eight weeks for the public to have their say on the proposals.

These routes will become part of the England Coast Path – the 2700 mile long distance walking route and England’s newest National Trail currently being developed around the entire English coast by Natural England.

“We have had discussions with many landowners and key organisations along the proposed Gosport to Portsmouth route; their input has been essential and helped shape the proposals - we thank everyone for their time and input so far.

“Over the next eight weeks, we are inviting all organisations, farmers, local residents, visitors and businesses to have their say. It’s important that all responses are taken into account and we look forward to hearing people’s views.”

“Over the last two years we have been working closely with landowners and access groups to shape these draft proposals and wish to thank everyone for their time and input. Building on the success of the existing South West Coast Path the proposals will improve access to some of the most iconic coastal landscapes in Cornwall, providing a community asset of truly international significance.

“We would encourage anyone within an interest in the coast path to take the opportunity to respond to our proposals and look forward to hearing people’s views.”

All representations must be received by Natural England no later than midnight on Thursday 15 August. Copies of the reports can be viewed in local libraries and council offices. The full reports and all the forms and guidance on how to make a representation or objection within the next eight weeks are also available on the GOV.UK website.