Public to have say on new National Parks

This weekend (20 October), the government launched its call for evidence on the future of our National Parks and Areas of Outstanding Natural Beauty (AONB).

For the first time in 70 years, the public will have its say on how designated landscapes will be protected, including whether housing and transport could be improved, the role these landscapes play in our cultural heritage, and how these iconic areas can boost habitats for wildlife. The public will also be invited to give their views on which parts of the country could benefit from greater protection and whether there is scope for the network to expand.

The call for evidence closes on 18 December and forms part of the recently-launched review into protected landscapes – led by Julian Glover – which is ensuring our National Parks and AONBs are fit for the 21st century.

The nation’s 34 AONBs and 10 National Parks cover a quarter of England’s land and are home to over 2.3 million people. They also generate over £20 billion for the rural economy, and support 75,000 jobs.

This announcement was covered by The Daily Telegraph, Daily Mail and Yorkshire Post.

For so many of us our love for nature is intrinsically linked with our protected landscapes, from holidays spent in National Parks to weekend rambles across our Areas of Outstanding Natural Beauty.

We want to ensure the people who live, work in and visit these cherished places have a say in their future. As we look afresh at these precious landscapes, I look forward to hearing from everyone who shares an interest in conserving and enhancing them for the next generation.

It’s an honour to lead a review into something as precious as England’s finest landscapes. From the Jurassic Coast of Dorset to the wilderness of the Cheviot Hills, they are still rich in beauty, local life, plants and animals – and enjoyed by millions of people.

But already, in this review, I’ve seen the pressures too. Local people need jobs and housing, farmers who look after the landscapes need help to survive, and biodiversity is under threat as the numbers of things such as birds and butterflies decline.

The good news is that I know we can do better – and in this review we are hearing lots of ideas about how to do it. Now we’re offering a chance for everyone who loves our National Parks and Areas of Outstanding Beauty to have a say. 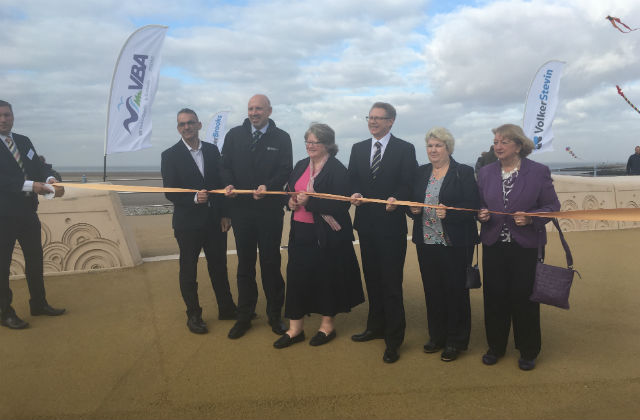 On Friday (19 October) Floods Minister Coffey was in Morecambe formally opening a new wave deflection wall to better protect the coastal town from floods. The £10.8 million scheme which was funded by central government will reduce flood risk to 11,400 homes and 2,246 businesses.

The wall which is an accomplishment following a partnership between Lancaster City Council and the Environment Agency, and taking into consideration climate change and sea level rise, will provide enhanced protection for the town for the town for a century.

The wall has been designed to fit in with the local environment, and also includes a nod to Eric Morecambe - with the shape of his glasses engraved in an end section.

Morecambe’s new Wave Reflection Wall, which has been entirely funded by the government, is absolutely fabulous and I want to thank the Council and other partners in their support in achieving this. I also want to thank local MP David Morris who worked tirelessly to make the case for nearly £11 million of investment into this flood defence, better protecting more than 13,000 homes and businesses as well as the local tourism industry from the risk of flooding.

You can watch the Minister speaking at the opening here.

Today (Monday 22 October) the Northern Ireland Affairs Committee have published their report ‘Brexit and Agriculture in Northern Ireland’. This has been covered by BBC News, ITV News, The Times and Belfast Telegraph.

The report states that the Government must explain how policy for farmers and growers in Northern Ireland will be devised in the absence of an Executive and ahead of Brexit.

We fully recognise the key differences between the needs of Northern Ireland’s farmers and agriculture sector and that of other parts of the United Kingdom. That is why we embrace and support the principles of devolution for agriculture. The Northern Ireland Secretary and the PM have been clear, and are clear with all parties, that the UK Government wants to see a devolved powersharing executive back in Stormont as soon as is possible.

The department is in close contact with counterparts in the Department of Agriculture, Environment and Rural Affairs (DAERA) on the implications for farmers as we leave the European Union.

In the run-up to the Agriculture Bill, there were 20 meetings at official level at which officials from DAERA were present. Since the Bill was introduced, we have been holding fortnightly meetings with their officials in addition to numerous bilateral discussions with DAERA, including in Belfast, and these will continue.

We have already pledged to continue to commit the same cash total in funds for farm support until the end of this current Parliament, providing more security and certainty for farmers and landowners than anywhere else in the European Union. As we move towards our new future farming policy, we will ensure that all parts of the United Kingdom are treated fairly and their individual circumstances are taken into account.