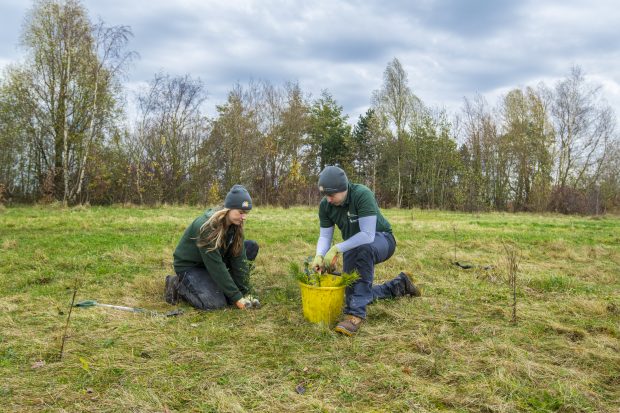 To mark the end of National Tree Week, on 5 December we announced £3.9 million to fund innovative tree planting schemes which will see hundreds of thousands of new trees planted, including in towns and cities and near rivers to reduce flood risk. Community nurseries, agroforestry and hedgerow management schemes are being supported by a £2.5 million fund from the Treasury and a further £1.4 million has been awarded to the Environment Agency to fund ‘woodlands for water’ – 15 projects to plant over 850,000 trees that will protect around 160km of river and help to reduce the risk of flooding to over 500 properties.

This announcement received positive coverage including in the Daily Mail, Daily Mirror and the Independent. This has also been reported in the Evening Express, Yorkshire Post and Farming UK.

Also in celebration of this year’s National Tree Week, on 6 December we announced £12 million of new funding from the Nature For Climate Fund for Community Forests to plant over 500 hectares of trees. The new programme - Trees for Climate - will see trees planted in 10 Community Forests across the country over the next five months. When mature, the trees will eventually store over 100,000 tonnes of carbon dioxide, playing an important role in the meeting the government’s net zero emissions by 2050 target.

This has received largely positive coverage including in the Sunday Telegraph, the Independent and Metro. It was also covered regionally and in trade titles such as Manchester Evening News, Western Morning News, The Argus, the Yorkshire Post, and Horticulture Week.

These announcements will help meet the government’s commitment to increase planting to 30,000 hectares per year across the UK by 2025. Government recently consulted on a new England Tree Strategy to accelerate tree planting and improve the management of our existing trees and woodlands.

The £640 million Nature for Climate fund will help us deliver the English portion of Government’s manifesto tree planting commitment, alongside peatland restoration and nature recovery. The Prime Minister also recently announced a further £40 million additional investment into the government’s Green Recovery Challenge Fund – this will go towards creating and retaining thousands of jobs in the environmental sector.