Tony Juniper at the Birdfair

On Friday (16 August), Tony Juniper took part in a ‘Question Time’-style panel debate with leading environmental campaigners, including Carrie Symonds and Chris Packham, at the Birdfair at Rutland Water in Leicestershire.

The Birdfair is Europe’s largest eco-tourism and bird watching event and is attended by around 24,000 visitors each year running Friday to Sunday (16 to 18 August). It has been described by Country Life, the Telegraph and the Stamford Mercury as the ‘Glastonbury of bird watching’.

Carrie Symonds said, in a speech before the panel debate, that politicians have a ‘gigantic responsibility’ for the environment and called puffin trophy hunters, ‘sick and cowardly’. This was widely covered by national media including BBC News, the Sun, Independent, Evening Standard and the Darlington and Stockton Times.

The debate focused on a range of environmental issues including discussions around climate change and trophy hunting. During the session, Tony Juniper spoke about his role as Natural England chairman.

Tony Juniper, Chairman of Natural England said during the debate:

At Natural England, I really want to draw together the conservation agenda and the climate agenda. If we restore our natural environment, it’s going to make us more resilient to climate change impacts and enable our wildlife to thrive.

He went on to talk about the public being disconnected from the natural world:

There is a really powerful agenda now linked to public health, that I think we can use to encourage more greening of cities and greening the edge of cities… We have a massive pile of data that one of the ways you can reduce the rise of [in-activity] trends is by facilitating access to the environment.

So, we’ve got a fantastic economic and business case which is about reconnecting people with nature, about public health… One policy I would like us to think about is rewilding greenbelts, so the bits right next to the cities. 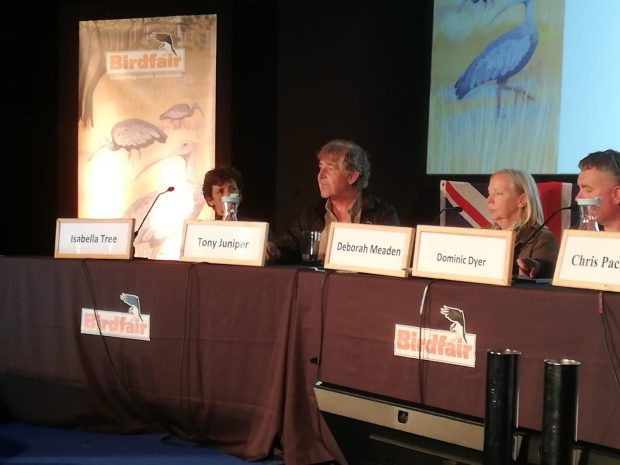 The Partnership for Action Against Wildlife Crime (PAW) once more had a stand at Birdfair and Superintendent Nick Lyall, Chair of the National Raptor Persecution Priority Delivery Group attended on Friday and talked about police work to tackle wildlife crime with visitors to the event.

Recently, Operation Owl became a national campaign working with the National Police Chiefs’ Council, National Wildlife Crime Unit and police forces across England and Wales. This scheme will raise awareness of raptor persecution amongst the wider public and police officers. It may also lead to increased reporting of criminal activity against wildlife.

On Saturday a Call for Evidence was launched to inform the National Food Strategy review, led by food entrepreneur Henry Dimbleby.

The call for evidence will give everyone from consumers, farmers and food producers, to scientists and academics, an opportunity to shape how we produce, sell and consume food in the UK.

In an op-ed published in The Independent Environment Secretary Theresa Villiers said the National Food Strategy will help fight climate change and loss of biodiversity.

We all have a stake in our food future, so there should be space at the table for everyone’s thoughts to be considered alongside the evidence presented by specialists.

We want a food system that is resilient to future shocks and that reflects our respect for the natural world and one another too – so that safe, healthy, high-welfare, nutritious, delicious British food is accessible for everyone.

And imagine the impact on our environment, our rural economy, and our health, if a greater part of our gigantic food procurement budget were invested in more local, sustainable food.

We’re launching the call for evidence today to gather insights and inspiration to help transform our food system.

These could be policies or ideas that make it easier for us to make more informed decisions about the food we eat; that make food production more environmentally sustainable; that help food businesses and communities to thrive; or that could put our country at the forefront of innovation in the coming years.

Whether you are someone who works in a food business, a farmer, a food processor, an interested citizen – whoever you are – we want to hear from you. We can’t wait to read your submissions and hear about your ideas.