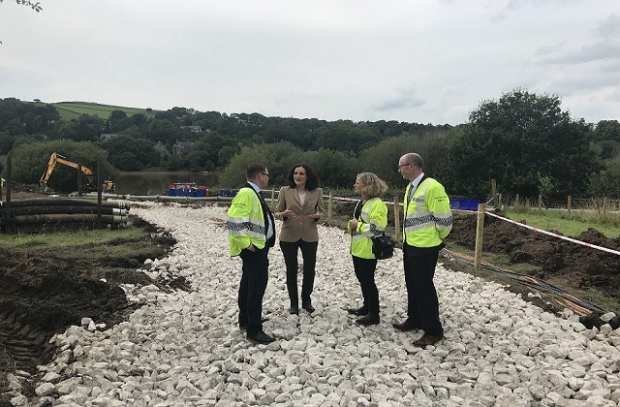 Positive coverage of the Secretary of State on the scene, along with Environment Agency chair Emma Howard-Boyd, ran on Sky, BBC News and ITV News and widely across regional radio and online media, including the Yorkshire Post, BBC Radio Manchester and BBC Radio London.

Elsewhere, the battle to lower water levels in the dam ahead of further forecast rain today, ran widely across broadcast, print and online. Several articles referenced comments from Defra Minister Thérèse Coffey’s breakfast media round with BBC Breakfast, Five Live and the Today Programme yesterday morning, including the Sun, Express and Star.

During her visit to Whaley Bridge, the Environment Secretary spoke to senior officials, including Chief Executive of the Canal and Riverside Trust Richard Parry, Derbyshire Police incident commander Inspector Adam Wilkins and RAF Squadron Leader John Plenty - who briefed them on the current measures being undertaken to fix the dam.

Measures include the use of RAF Chinook to drop over 400 sandbags, and the use of pumps to remove excess water from the reservoir -  levels continue to fall as the operation to pump away water continues.

The Secretary of State then visited the Rest Centre at Chapel-en-le-Frith school, which is being used as a community hub, where she met with residents who have been evacuated from their homes.

My thoughts are with the people who have had to leave their homes. Having spoken today to some of those evacuated I know how difficult this situation is for them and I pay tribute to their patience and fortitude. It’s been wonderful to see the community support and spirit in Whaley Bridge.

I want to thank all emergency services, military personnel, Environment Agency and volunteers for their continued hard work. I am confident that everything that can be done is being done and I’ve seen a reassuring amount of progress today.

Visiting Whaley Bridge today it was amazing to see the pur

e dedication of the teams at work here. Not just those in the Environment Agency - of whom I am immensely proud – but the numerous other organisations that are working tirelessly to keep the community safe.

Real progress has been made, and after seeing our pumps and the RAF Chinooks at work today I am confident we are doing all we can to lower the water levels and secure the dam.

The Environment Agency continues to monitor the flood risk closely.