During the visit he visited a number of local businesses including Kilkeel Seafoods & Sea Source and discussed a number of issues facing the Northern Irish fishing industry including EU Exit. He also had the opportunity to tour both harbours, see planned developments and meet local school children learning about local marine life.

While in Ardglass he spoke to BBC Northern Ireland, with his interview covering Brexit, what it means to fishermen, the future for the Northern Ireland fishing industry together with the importance of securing a deal with the European Union.

I am delighted to visit the fishing ports of Arglass and Kilkeel at such a pivotal time for our fishing industry as we leave the EU and become an independent coastal state.

With a high quality catch and a skilled workforce, it is heartening to see first-hand the ambitious plans for the future and share our enthusiasm for fishing with future generations 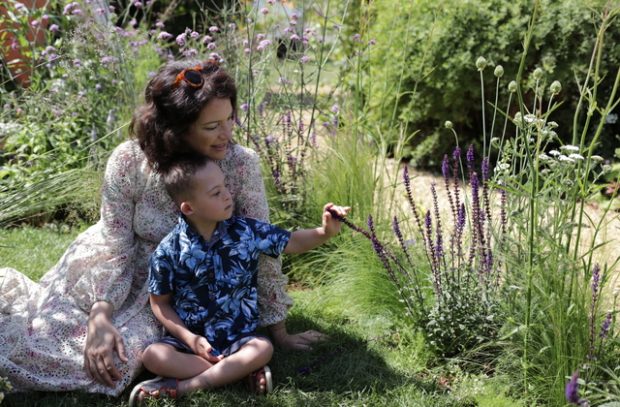 Yesterday saw the unveiling of the Year of Green Action Garden at the Hampton Court Garden Festival, an innovative garden designed to give children of all abilities the chance to access and enjoy nature.

The garden, which has been awarded a silver medal by the show’s judges, has already been covered by the Telegraph,  Horticulture Week, House Beautiful, Able Magazine, and Smallholder, with the BBC due to look at the garden as part of their coverage of the show on Thursday.

Year of Green Action ambassador Rachel de Thame and Rural Affairs and Biosecurity Minister Lord Gardiner visited the garden on the opening day of the show, with children joining Rachel to enjoy the plants in the garden

Created together with young people with disabilities and the Sensory Trust, the garden takes visitors of all abilities on a journey through the senses, with plants specially chosen for their multisensory appeal.

Scent, touch and taste are all appealed to with the furry leaves of woolly thyme, while the velvety leaves of senecio ‘angel wings’ are for children to touch and feel. The garden is decorated with ceramic tiles designed by children with disabilities and their families.

The Year of Green Action Garden will also ask visitors to pledge to help improve the environment so we become the first generation to leave it in a better state than we found it – a key objective of government’s 25 Year Environment Plan.

The Year of Green Action Garden is a demonstration of the role gardens and other outdoor spaces can play in sparking joy for nature in all children.

Family gardens give children one of their first opportunities to connect with nature, and the Year of Green Action Garden shows how we can all create spaces for everyone to enjoy while being mindful of how they can benefit wildlife and the environment.

Family gardens, schools and other organisations can create features such as dens, sensory domes and bug hotels, but on a smaller scale we can all choose plants that have a multi-sensory appeal as well as being attractive to wildlife.

The creation of the garden comes midway through the government’s Year of Green Action forming a part of the Government’s 25 Year Environment Plan, where individual and businesses are being encouraged to do more to help nature and the environment. Children and young people are at the heart of the Year of Green Action, which is why the government has pledged £10m to help children from disadvantaged backgrounds better access the natural environment.