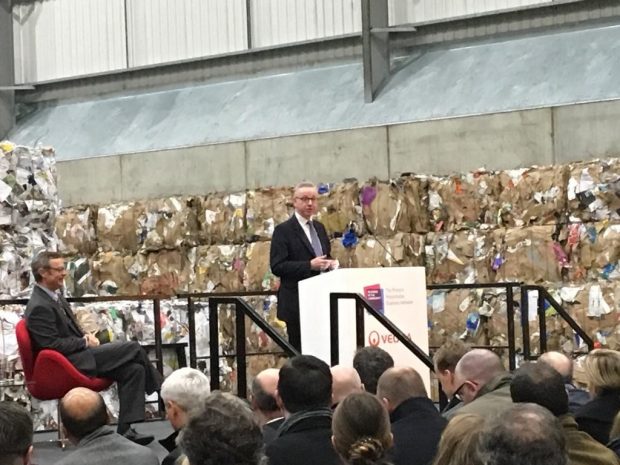 Last night’s episode of BBC One’s War on Plastic with Hugh and Anita saw the presenters speak about Government proposals to make producers pay for the packaging waste they create, as part of our landmark Resources and Waste Strategy.

The episode featured two interviews with the Secretary of State, both filmed before the Strategy launched in December and therefore not reflecting the proposals we have since put forward. In the clip, Hugh pushes for Michael Gove to give a figure for the percentage he thinks producers should pay for disposing of their packaging correctly. At the time of the interview, the policy had not been agreed within government and so the Secretary of State could not, at that time, provide a definitive answer.

However since then the strategy has been published, setting out that producers will have to cover 100% of the costs of disposing of packaging waste, up from just 10% now. A third interview, filmed at the launch and reflecting our up-to-date policy position, that the full costs will be covered through a new packaging Extended Producer Responsibility (EPR) system, is due to feature next week but was not mentioned in last night’s programme.

As we set out in the Strategy, costs of managing packaging waste will be funded by industry through a packaging EPR system. This will mean businesses and manufacturers pay the full cost of recycling or disposing of their packaging waste, overhauling England’s waste system and putting a legal onus on those responsible for producing damaging waste to take greater responsibility and foot the bill.

Since publishing the Strategy, we’ve made further progress on making this a reality. We recently held a consultation on a number of innovative measures for managing waste in England, including on a new EPR system. The changes will make up a key part of the government’s upcoming Environment Bill, to be introduced early in the second session of Parliament.

But our plans go much wider. We also consulted on a consistent set of material which would be recycled by all councils across the country, on introducing a deposit return scheme for drinks containers and on introducing a new tax on plastic packaging which does not contain at least 30% recycled material.