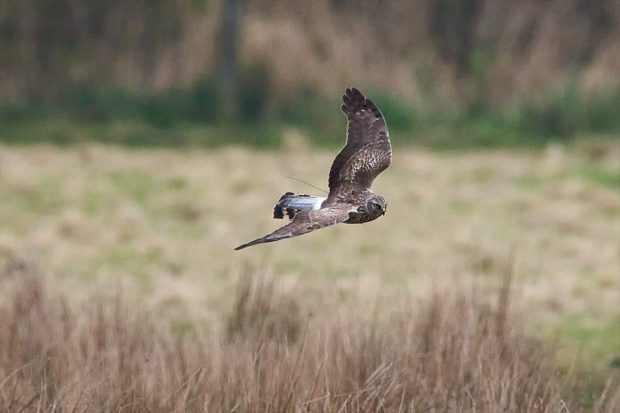 This morning, there has been widespread coverage of the report in national newspapers such as The Times, I, Independent,BBC News, Guardian, the National and trade publications including the New Scientist. The articles factually report research on satellite tagging data of hen harriers in England suggests a strong evidence to support the claim that hen harriers are being illegally killed on grouse moors in England, stating 48 out of the 58 satellite-tagged birds have disappeared predominantly in the north of England in comparison to data for Scotland, and makes reference to the High Court Ruling won by Natural England on 15 March 2019 for Brood Management trials. The Independent also comments that this new report and evidence adds to pre-existing research that suggests hen harrier numbers in England are low due to wildlife crimes committed, increasing the pressure for grouse moors to be licensed.

This research identifies the scale of the problem hen harriers have faced on grouse moors. It makes for sobering reading and shows how vital it is that everyone involved in the future of this wonderful bird pulls together. Natural England is working in partnership with a wide range of stakeholders, including moorland communities, conservation organisations, police and landowners to implement the joint Hen Harrier Action Plan which aims to improve the conservation status of this at-risk bird.

Last year’s Hen Harrier breeding season was the most successful in over a decade with 34 chicks fledged across the country. While this was very encouraging we recognise that a continued partnership approach is required to combat illegal persecution of these rare birds and ensure that numbers of breeding hen harriers continue to grow.

Natural England welcomes the publication of this study, which demonstrates the value of tagging as a legitimate conservation tool. These analyses are a significant step in understanding the fate of tagged hen harriers, and confirm what has long been suspected – that illegal persecution is having a major impact on the conservation status of this bird.

Through the Defra-led Joint Hen Harrier Action Plan, Natural England has taken the lead on sets out six core actions to increase hen harrier numbers in England and believe that it remains the best way to safeguard the hen harrier in England. Actions include:

Hen harriers, like all wild birds, are protected from illegal killing by the Wildlife and Countryside Act 1981. Raptor persecution, including the persecution of hen harriers, is a UK wildlife crime priority, with hen harriers one of six species highlighted for special attention. We have strong penalties in place for offences committed against birds of prey. Anyone who kills or injures a wild bird could face jail if convicted.

The National Wildlife Crime Unit, which is part-funded by Defra, monitors and gathers intelligence on wildlife crime, including raptor persecution, to assist wildlife crime officers.

On behalf of Defra, Natural England is leading on monitoring work, nest and roost protection, and the southern reintroduction and scoping a trial brood management scheme. In delivering these actions, Natural England is working with a wide range of stakeholders including the various organisations with an interest in this area, individual members of the moorland community and estates.