The high court has today handed down its judgement following a judicial review brought by Client Earth in relation to the government’s air quality plan.

We are pleased that the judge dismissed two of the three complaints. The judge found that our modelling is compliant and that our approach to areas with major air quality problems is ‘sensible, rational and lawful’.

The Court has also asked us to go further in areas with less severe air quality problems. We had previously considered that it was sufficient to take a pragmatic, less formal approach to such areas. However, in view of the Court’s judgment, we are happy to take a more formal line with them.

We have already delivered significant improvements in air quality since 2010 and we will continue to implement our £3.5 billion air quality plan.

- The government had already asked these authorities to provide details of measures they are taking to improve air quality by next Wednesday (28th February). We are requesting that they all come to Westminster to discuss these in detail.

- Present problems with air quality in the UK are the direct result of the EU’s failed emissions testing regime, the actions of irresponsible car manufacturers, and the rapid increase in the number of diesel cars on the road since 2001

- Despite this, the UK government has made significant progress in reducing harmful emissions since 2010:

- The Government is investing £3.5 billion to improve air quality:

[Published in the AQP]

£1bn – to support the uptake of ultra low emissions vehicles.

£11m – awarded to local authorities in the Air Quality Grant.

£1.2bn – for a Cycling and Walking Investment Strategy.

£100m – for air quality as part of the Road Investment Strategy, which allocated a ring-fenced fund for Highways England to improve Air Quality on its network

[New commitments in the November 2017 Budget]:

£220m – for a new Clean Air Fund to support individuals and businesses impacted by local plans to improve air quality.

£100m additional funding for the Plug-in Car Grant, to  help consumers with the cost of purchasing a new battery electric vehicle

£200m (matched by a further £200m private investment not included in £3.5bn figure) – to support the wider roll-out of electric vehicle charging infrastructure 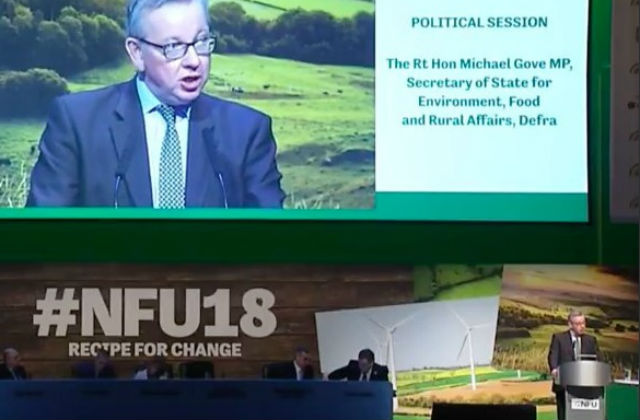 The Environment Secretary Michael Gove set out his plans for the future of agriculture outside the EU yesterday, with a speech at the annual National Farmers’ Union (NFU) conference yesterday (Tuesday 20 February).

This was covered across broadcast titles such as BBC News yesterday following an interview with Mr Gove which focused on his commitment to supporting our farmers and moving away from the Common Agricultural Policy. The story is also positively covered across national titles today including the Financial Times, Daily Telegraph, Daily Mail, Guardian and the Sun.

In his speech, the Environment Secretary highlighted his ambition to see increased investment in rural broadband when we leave the EU and reinforced his commitment to working with the Home Office on a new Seasonal Agricultural Workers Scheme (SAWS) to make sure the food and farming sectors have reliable access to labour post-Brexit.

He also announced a comprehensive review of farm inspections to remove bureaucratic burdens placed on farmers which is covered across trade titles such as Farmers Guardian and Farmers Weekly.