There is coverage in today’s Daily Telegraph, the Daily Express, BusinessGreen and the Eastern Daily Press, reporting on the Natural Capital Committee’s (NCC’s) - an independent advisory body to the environment on natural capital and wealth management - final response to the 25 Year Environment Plan (25 YEP) Progress Report.

The NCC’s report highlights that the majority of England’s natural assets (air quality, marine environment, soils and land) examined by the committee, five out of seven are ‘deteriorating’, while no natural asset group is making progress in meeting existing targets and commitments.

We are grateful for the expert advice the NCC has provided, and appreciate in particular how the NCC has supported a better understanding of England’s natural assets and the benefits we get from nature, and helped to ensure that natural capital is integrated into government policy.

We have taken significant steps forward in delivering our environmental commitments outlined in our 25 Year Environment Plan. We became the first major economy to legislate for net zero and underlining our commitment to achieving this target, and we launched a consultation on bringing forward the end to the sale of new petrol and diesel vehicles to 2035, or earlier if a faster transition appears feasible, including hybrids for the first time.

We have brought forward the first Environment Bill for more than 20 years to help leave the environment in a better state than that in which we found it. The Bill, alongside our strengthened Agriculture and Fisheries Bills , sets a new legal foundation for government action to improve the environment. The Bill will ensure the environment is at the heart of all government policy making and that this government – and future governments – are held to account if they fail to uphold their environmental duties, including meeting net-zero by 2050, and wider long-term legally binding targets on biodiversity, air quality, water, and resource and waste efficiency established under the Bill.

We have made significant progress implementing our 25 Year Environment Plan for a greener future. We have introduced our landmark Environment Bill which sets out our vision to protect our natural environment for future generations, and become the first major economy to commit to reach net zero emissions by 2050.

As we rebuild our economy in response to the coronavirus pandemic, we are committed to shaping a cleaner, greener and more resilient society to protect and restore our natural environment and diverse ecosystems.

Through the Environment Bill we will also mandate ‘biodiversity net gain’ to ensure that the new houses we build are delivered in a way which protects and enhances nature, helping to deliver thriving natural spaces for local communities.

The Environment Bill sets a new and ambitious domestic framework for environmental governance. It will establish the OEP, a new independent body to champion and uphold environmental protections, advising Government and holding public authorities to account for their implementation of environmental law. The OEP will also monitor and report on progress against Environmental Improvement Plans and targets.

The NCC advises government on the natural environment, including how to implement the 25 Year Environment Plan and track progress against the Plan’s objectives. With the Committee’s final term due to finish at the end of 2020, the NCC’s role in tracking progress against the Plan’s objectives will be picked up by the OEP once it is established in 2021. 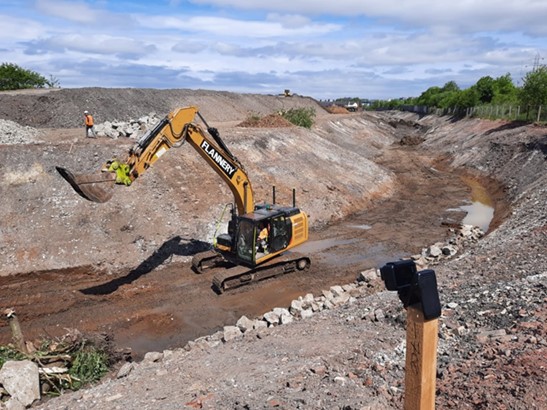 There was coverage in this weekend’s Sunday Telegraph (25/10) of a project to divert a stretch of the River Trent in Stoke in order to provide habitat for otters, wild brown trout and kingfishers and reduce flooding. A package on the project also featured on BBC Countryfile on 13 September when presenters filmed work to transform the river with Matt Lawrence from the Environment Agency.

The Environment Agency is working with Natural England to provide more meanders in the straight section of the river that runs through the Victoria ground, the former home of Stoke City Football Club. The river currently runs through a concrete channel which was built to more quickly funnel polluted out of the city during the Industrial Revolution, leaving it devoid of the habitat needed to support aquatic life.

This is being replaced with about 400m of meander to slow the flow of the river and provide more space for water, which will reduce flooding.

This ambitious scheme is the flagship project of 16 separate pieces of work under the SUNRISE (Stoke and Newcastle Rediscovering its Secret Environment) programme. The £3.6m programme is funded by the European Regional Development Fund (ERDF) with contributions from the Environment Agency and other partners.

Work is currently progressing to dig the new 500m channel through the site, connecting the new stretch of river to an area upstream which is in much better shape. Work is expected to finish in December this year.

A new footpath adjacent to the river channel will be built and opened a year or so later to allow the local community to enjoy the wildlife that the new river channel will attract. Reconnecting communities with both green spaces and watercourses is another aim of the SUNRISE programme.

For the residents of Stoke-on-Trent, and for wildlife, this is an imaginative and inspiring use of a derelict brownfield site.

Where once the noise of fans rang out on a Saturday afternoon, it’s hoped it will soon be the plop of fish swimming and whistle of birdsong filling the air instead. And, we will all take on responsibility for ensuring this new stretch of the Trent is protected for generations to come.