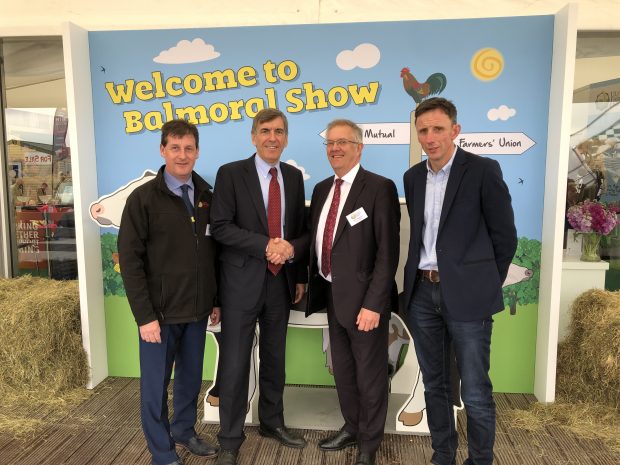 At the show, the Minister met with officials from the Department of Agriculture, Environment and Rural Affairs (DAERA) and members of the Ulster Farmers’ Union, including Chief Executive Wesley Aston and President Ivor Ferguson. They discussed the vital contribution that farmers and producers make to local life and the economy both at home and abroad, as well as both the opportunities and challenges for the future as the UK leaves the EU.

The Minister then had the opportunity to tour the Northern Ireland Food Pavilion, where more than 100 different producers were out in force to show why Northern Ireland was last year named the world’s Best Food Destination.

Touring the stands with Food NI, the Minister was able to sample a few products from companies supported by the UK Government’s FoodIsGREAT campaign, such as Ballylisk of Armagh cheese and Galstry Farm ice cream.

The Balmoral Show is a wonderful showcase for Northern Ireland’s high-quality livestock, food and drink and farm produce and all the exhibitors here should be rightly proud of their achievements.

Year after year, visitors flock to the show to experience the very best that Northern Irish farmers and producers have to offer, and it’s no surprise that their products play such an important part in the UK’s food and drink export success story.