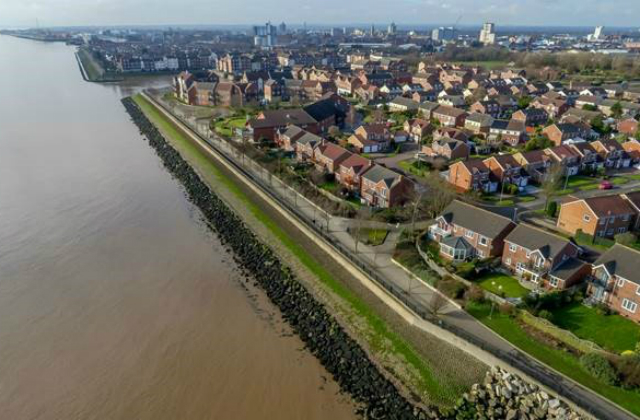 Construction of a multi-million pound scheme to protect thousands of homes and businesses in Hull from flooding from the Humber has been given the go ahead. The announcement was covered by BBC News Online, BBC One Look North, BBC Radio Humberside, the Hull Daily Mail and the New Civil Engineer,

The £42 million flood alleviation scheme, approved by Hull’s planning committee earlier this month on the fifth anniversary of the tidal surge that caused devastation to the city, has now had final sign off from the Secretary of State for the Ministry of Housing, Communities and Local Government.

The defences will provide a 1 in 200 year standard of protection and will reduce tidal risk for 113,000 homes and businesses.

It will see more than 7 kilometres of tidal flood defences along the Humber estuary improved.

The design of the flood defences will include some areas of glass panels to maintain a view of the waterfront and recessed sections to display artistic works.

Now that the planning application has been approved, preliminary work is due to start on the scheme early this year.

I am delighted that the owners of 113,000 homes and businesses in and around Hull will benefit from a fully government funded flood defence improvements which will help for many decades to come.

This new flood defence scheme costing £42 million from taxpayers’ money has been well supported by the City Council and a number of other key partners, showing what can be achieved when we work together towards a common goal.

We are delighted that the Humber Hull Frontages scheme has been given final approval and look forward to making progress on the ground early in the New Year.

This £42 million investment is great news for the city as it will allow us to better protect thousands of homes and businesses. We will continue to keep residents and businesses affected by our work informed about the scheme at every stage of its development.

This long-term investment will contribute to securing the viability of Hull and the wider Humber region, ensuring it retains its place as a major contributor to the UK economy.

Thousands of racing greyhounds are to be better cared for as a result of a new deal worth an estimated £3 million this year, to be paid for by some of Britain’s biggest bookmakers.

The move will be underpinned by the ‘Greyhound Commitment’ - a long-term strategic plan from the Greyhound Board of Great Britain, which will ensure animal welfare and the integrity of greyhound racing remain paramount in the sport.

The extra money will go towards improving safety across the nation’s 21 licensed racetracks, kennel improvements, the expansion of an injury recovery scheme for the animals and providing more homes for dogs in retirement.

All animals involved in sport deserve the highest level of care both during their racing careers and in retirement.

I am pleased to see the industry taking further steps to improve the welfare of greyhounds, including safer race tracks, better training for veterinary staff and more homes for dogs in retirement.

We have some of the highest animal welfare standards in the world and we are continuing to explore ways to enhance our position as a global leader, for instance we recently announced a ban on the third party sale of puppies and kittens.