Secretary of State meets farmers, growers and rural businesses in visit to Scotland 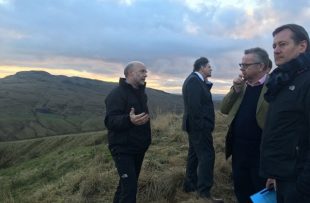 Environment Secretary Michael Gove spent an action-packed three days in Scotland this weekend, visiting a number of businesses and operations important to the Scottish rural economy.

Attending a farmers roundtable hosted by local MP Luke Graham, the Defra Secretary met with NFU Scotland representatives and local farmers across the constituency who had their chance to highlight the most important issues for Scottish farmers to the Secretary of State directly, and engage in discussion on the priorities for the forthcoming Agriculture Bill.

A number of key issues for Scottish rural businesses were discussed as part of a productive weekend visiting farmers, growers and key stakeholders in the areas surrounding Stirling and Aberdeen.

Amidst the busy schedule, he also found time to speak to Sunday Times and the Courier to discuss the visit.

The Independent Digital this weekend splashed on a story highlighting a rise in emissions from ships.

Analysis presented in a National Atmospheric Emissions Inventory (NAEI) report to the government concluded shipping is a greater source of pollution in Britain than estimates made in 2014 suggested.

This is primarily due to new methodology based on improved coverage of domestic shipping activity, including the use of Automatic Identification System (AIS) data and the inclusion of new vessel types not covered by the previous estimates (such as offshore industry vessels).

The new methodology will provide more reliable data on emissions from shipping and inform the development of options to reduce them.

“We have consistently pressed for the most stringent international controls in high risk areas such as the North Sea and English Channel, and have seen shipping emissions fall through regulatory standards.

“This year we will publish a comprehensive clean air strategy which will set out further steps to tackle air pollution across all sources, including emissions from ships.”

The Sun’s front page this morning reported the suspected finding of bird flu in wild Swans in Windsor. We are currently investigating the finding and expect laboratory results early this week.

A strain of the H5N6 bird flu virus has been circulating in Europe over the past few months. There have been no cases of the strain of the virus affecting people and Public Health England have confirmed that the risk to public health is very low.

Following the introduction of an Avian Influenza Prevention Zone last month, maintaining good biosecurity is now a legal requirement for bird keepers across the UK. The risk to kept birds remains low as long as keepers have good biosecurity in place.

More information on the bird flu situation can be found here.