This morning there was coverage in the Daily Mail following Minister Coffey’s signing of the secondary legislation to put the microbeads ban in place.

This announcement comes shortly after both houses of parliament debated and agreed on the microbeads ban. The ban will target plastic microbeads in rinse-off personal care and cosmetic products such as face scrubs, toothpastes and shower gels. It is one of the strongest in the world and is part of the wider government crackdown on plastics.

After a 21-day lead in time, the ban on the manufacture of products with microbeads will come into force on 9 January, with a ban on the sale from July 2018.

I am delighted parliament has approved our ban on the plastic microbeads which do so much harm to marine life.

Our ban has been welcomed as the strongest in the world by campaigners and it’s in addition to the other action we are taking to tackle plastic waste. We have removed nine billion plastic bags from circulation with our 5p carrier bag charge and are looking at how we can reduce waste from plastic bottles and other drinks containers. 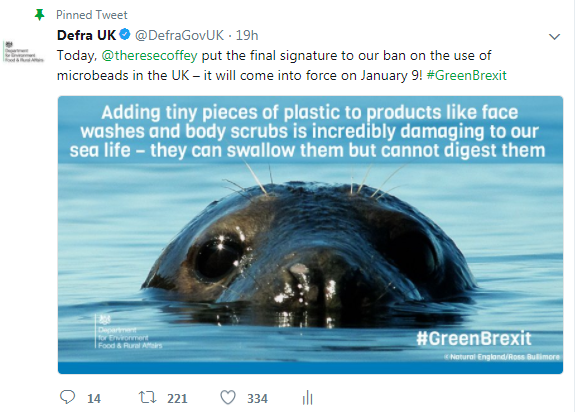